Homeowners across San Diego would be able to install movable “tiny houses” in their back yards under a proposal the city’s Planning Commission unanimously approved last week.

Tiny houses can help solve the housing crisis by creating an affordable option for low-income residents that doesn’t require a taxpayer subsidy, city officials said. Rent from tiny houses can also help homeowners with their mortgage payments, they said.

“It really is a win, win, win for the taxpayers, the homeowners and the renters,” said Barret Tetlow, chief of staff for Councilman Scott Sherman.

Tiny houses are similar to granny flats, but smaller.

Adding them is quicker and cheaper, primarily because they are built in factories and placed on a chassis, while granny flats are built on-site and attached to a concrete foundation.

Planning commissioners said Thursday that legislation allowing tiny houses could help the city make up for years of previous laws and regulations that created a local housing crisis by sharply limiting supply.

“The last 30 years of wrong-minded policies have gotten us into this housing crisis, and I think it’s innovation that’s going to get us back out of it,” Commissioner Doug Austin said. “We can’t subsidize our way out of this.”

Austin was referring to a variety of housing solutions that have relied on government subsidies to artificially lower rents.

Some neighborhood leaders urged the Planning Commission to delay approval of the tiny houses ordinance, complaining that community planning groups haven’t had a chance to evaluate the proposal because of the COVID-19 pandemic.

“The communities deserve and need to be heard before you act,” said James Fitzgerald of La Jolla in an email to the city. He added that the law would have “direct and potentially substantial impacts throughout the city.”

Other neighborhood leaders said the tiny houses would likely work better in some parts of the city than other parts, making input from individual neighborhoods crucial.

Commissioner Vicki Granowitz noted that most of those complaints came from residents in coastal areas, who will get a chance to voice any concerns they have to the Coastal Commission.

If the City Council agrees with the Planning Commission and approves the new law this spring, it wouldn’t take effect in coastal areas until the commission also gives its assent.

Commission chairman Bill Hofman said not having neighborhood feedback is a concern, but the new law is similar to regulations approved in 2017 for granny flats. Neighborhood leaders gave extensive input on those, he said.

“I think the need for more alternatives for affordable housing outweighs the need for community input on something that really has been vetted,” he said.

Nationally the tiny house movement began as an attempt to downsize and live more simply, often with a smaller environmental impact. Its growth was supported by TV shows like “Tiny House Nation.”

More recently, cities and nonprofits have started looking to tiny houses as a solution for homelessness and the lack of affordable housing.

Fresno, San Luis Obispo, Los Angeles and San Jose have all passed laws allowing tiny houses. Laws also are under consideration in many other parts of the state.

Under the proposed city law, a homeowner could not have both a granny flat and a tiny house. They would be limited to one or the other, which complies with state law.

City officials said a key advantage to tiny houses is how quickly they can be added. While a granny flat typically takes six to 18 months, a tiny house can be added in 30 to 45 days.

Tetlow said that once a homeowner orders a tiny house, a company begins manufacturing it while some if its employees visit the property to prepare utility connections and make other preparations.

While movable tiny houses have wheels, city officials said, they aren’t like a conventional trailer or recreational vehicle. Instead, they are built like a traditional home, with interior space geared for daily living.

The city’s law would require the house’s wheels to be shielded from view. In addition, it would require pitched roofs and other design details that would prevent people from parking traditional recreational vehicles in their yards.

“We feel we’ve been able to eliminate 95 percent of conventional RVs and trailers,” Tetlow told the Planning Commission.

Because of wildfire concerns, tiny houses wouldn’t be allowed on properties located in the city’s urban/wildland interface — neighborhoods that abut canyons or wilderness.

A tiny house couldn’t be rented out for fewer than 30 days at a time, so they wouldn’t be used as short-term vacation rentals.

Property owners would not be required to provide an on-site parking spot for the tiny house. And a tiny house wouldn’t have to comply with the federal Americans with Disabilities Act.

They would have to be registered with the Department of Motor Vehicles, but they couldn’t move under their own power. And the wheels couldn’t be removed because they’re needed to support the structure.

Despite the tiny houses being potential competition, the local development community supports the effort.

“A variety of housing options are essential if we are to address our chronic housing shortage, and tiny homes deserve a place in our long-term strategy,” Matt Adams, vice president of the local chapter of the Building Industry Association, told the Planning Commission. 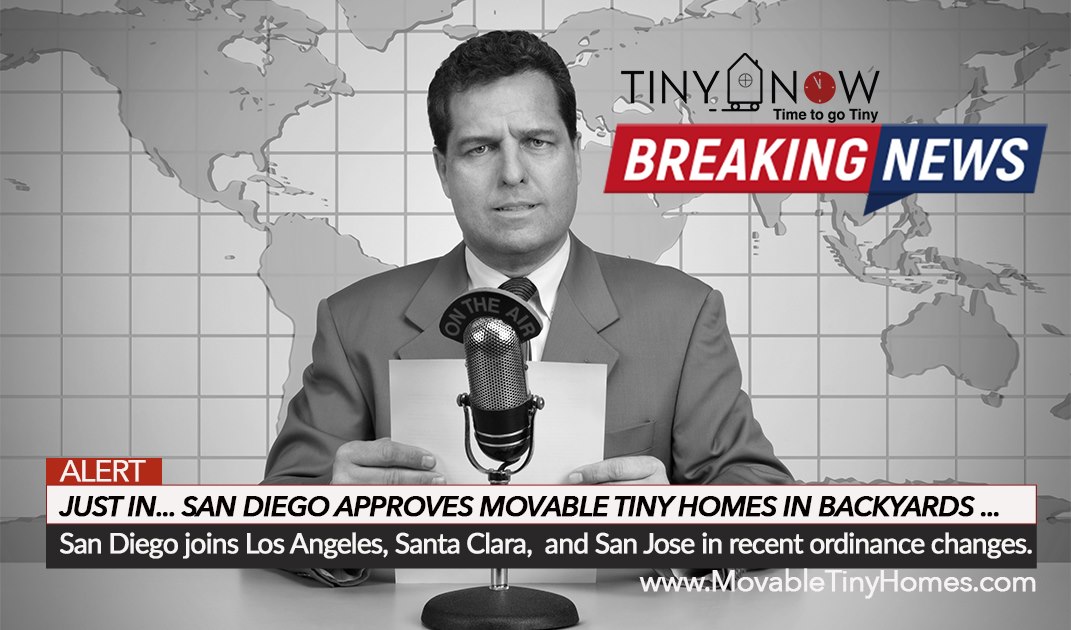